JESUS 'Take heed that you do not your justice before men, to be seen by them: otherwise you shall not have a reward of your Father who is in heaven.' – Gospel of St. Matthew

How holy are you? Holy like Pope Francis?
Learn from the Master Player of the Game – the People's Pope, the Pope from the 'end of the world', the New Word Order Pope.

VENERABLE ARCHBISHOP FULTON J SHEEN – "Religion is popular only when it ceases to be truly religious. Religion by its very nature is unpopular – certainly with the ego."

CARDINAL DOLAN – "It's gotta be Pope Francis. He has really ignited the imagination of the world. And for once, finally, people are saying 'WOW!' There's reason to cheer. There's reason to hope…You know what I think it is? Two words: sincerity and simplicity. We have a world that can kind of detect frauds. We have a world that is a little tired maybe of marketing and polls and PR stuff and here you've got a guy who is just so genuine and simple and sincere. He doesn't need anybody to script him. He doesn't need any pro to say 'you ought to go there' or 'you ought to do this'. He just does it with a genuineness and a naturalness that people are shaking their heads and saying 'this guy's the real thing'." (Face the Nation, CBS NEWS, 2013)

A CULT OF PERSONALITY – arises when an individual uses mass media, propaganda, or other methods, to create an idealized, heroic, and at times, worshipful image, often through unquestioning flattery and praise.

PHOTO OP – an arranged opportunity to take a photograph of a politician or celebrity. The term was coined by the administration of US President Richard Nixon and has acquired a negative connotation, referring to a carefully planned pseudo-event, often masqueraded as news. It is associated with politicians who perform tasks such as planting trees, picking up litter, and visiting senior citizens, often during election cycles, with the intent of photographers catching the events on film, generating positive publicity

PUBLICITY STUNT – a planned event designed to attract the public's attention to the event's organizers or their cause. Publicity stunts can be professionally organized, or set up by amateurs. Such events are frequently utilized by advertisers, celebrities, athletes, and politicians. By staging and managing the event, the organization attempts to gain some control over what is reported in the media. Successful publicity stunts have news value, offer photo, video and sound bite opportunities, and are arranged primarily for media coverage 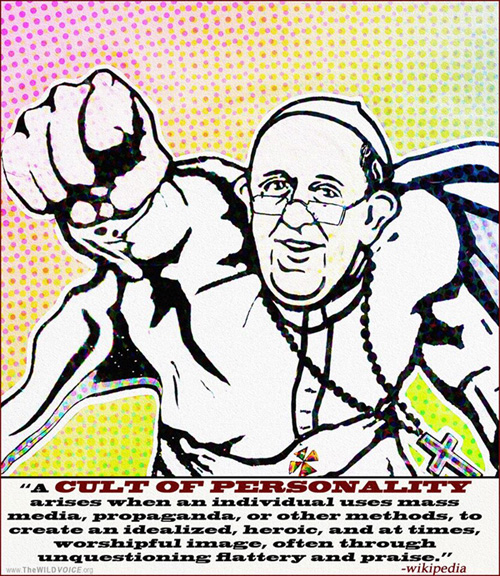 On March 13, 2013 Cardinal Jorge Bergoglio was elected Pope of the Catholic Church. Since then (and for the first time in history) a Catholic Pope has become a mass phenomena: a living legend, an icon, a fashion guru, a saint, a man of change, an innovator, a revolution, a savior of the world. Pope Francis I is his name: the man of the poor, the last, the unfortunate, the forgotten, the suffering, the sinner, the atheist. We are here to celebrate his personal success and triumph. His ways, his goodness, his vision, his desires, his plans, his freedom and his decisions are of true love, real love, great love – therefore we love them.
The change has come at last: the old, dark, unfair, rich, intolerant, immobile, close-minded, corrupt and pedophile-filled Catholic Church is ready for a renewal and we all love it; the Catholics, the Protestants, the atheists, the LGBT folks, the good, the bad, the uninterested, the vagabond, the soccer fan, the bus driver, the Muslim, the child, the politician, the nun, the rich and the poor love him and his message. He's a man for all and of all.
'Finally a real Christian' some millions of non-believers have said, and we are joyful as they now know the Truth. He wears regular shoes and no cross made of gold is on him. He sleeps in a modest apartment outside the dark walls of the Vatican Palace. He secretly and humbly sneaks out at night to feed the poor so that no one will know about it. He hugs, kisses, smiles and rejoices with the loud crowds. He has appeared on all the important covers of the world's magazines and we are proud of it. The media embraces him: his message is sweet and caring – not intolerant or judgmental as the ones delivered by his predecessors. Other religions welcome him with open arms in the same way he is open to them; this is true Christianity, we are now taught. Tolerance, dialogue, openness, communication, mercy, poverty, simplicity, humility, acceptance, equality and love are his virtues. We must follow him as the true example, or we might begin to sound a bit 'harsh' in our old beliefs. His ways must be our ways. His extraordinary relatability makes him one of us: he cares for the environment, for the unemployed, the young and the old, while the sick, the poor and the adulterer find a secure shelter in him. How can there be Catholics who do not love him? And so, we love him. We all love him. He is that breath of fresh air that renews the two thousand-year old doctrine inherited from the fathers of this old-fashion Church: times have changed, the world has changed, we have changed and, in a complex time when no longer are there merely 2 genders but rather 56, something must change. We all celebrate this pope: his images and his statues are now beginning to fill the churches; his holy pictures and his quotes are widespread and admired by the many; his peace and his goodness fill our hearts.
This is our New World Pope: the Pope for the New World that is to come. A World of new ideas, new concepts, new ways and new teachings. 'After all' we say, 'the world has been a dark place for thousands of years. Therefore changes are needed in society…including Christianity'.
We are all filled with hope as we witness the world embrace the Catholic Church and its teachings – or, should we rather say, as we see the world embrace this pope's ideas and his changes of Catholic doctrine? It would sound just perfect if not for another detail: when do we remember seeing the name JESUS CHRIST last? Other than during his brief homilies (in which we still hear the name of Jesus being pronounced) all we read, hear and see is POPE FRANCIS: what he does, what he says, what he thinks, what he likes, what he prefers, where he lives, what he does, where he is, what he wants, what he believes in, what he wears and thousands of other details.
One question that comes to mind through simple logic is: if he is so efficacious in his message of love, how many 'conversions' to Christianity have occurred so far? Or are we instead, to expect millions of conversions to Francistianity?
This, brothers and sisters living on this thin crust of dirt, is our new pope.
Welcome to THE NEW WORLD POPE of a new world and with new rules.
(excerpt from NEW WORLD POPE, MEDIA SENSATION – originally published July 12, 2014)

← VIDEO: Gradual And Alleluia in China
VIDEO: Once Upon A Time… →