"Men will surrender to the spirit of the age. They will say that if they had lived in our day, faith would be simple and easy. But in their day, they will say, things are complex; the Church must be brought up to date and made meaningful to the day's problems. When the Church and the world are one, then those days are at hand." – Saint Anthony, 4th Century

The Antichrist is rising.
Churches are empty while nomadic temples filled with false light and occult symbols swallow humanity.  Electricity carries the lie and marks of Satan to a desensitized world on a scale heretofore unimaginable.
The music industry's homages to Lucifer are so blatant now that they are no longer even veiled or hidden, but rather flaunted and celebrated.
The False Prophet Pope Francis steals applause from Jesus and then laughs with his fans.  He is venerated by gushing media personalities such as Anderson Cooper as well as giddy priests who love his push toward "change".
A slick commercial for the Illuminati rings eerily true and echoes the very same ideas of Protestant Pope Francis.
He is, after all, the New World Pope and will accomplish a New World Order.
Are we in end times? Is biblical prophecy unfolding now? Are Catholic prophecies and warnings from Our Lady now coming to pass?
The answer is now so very easy to see, and still so hard to really look at.
We hope you will dare to look with fresh eyes and see. 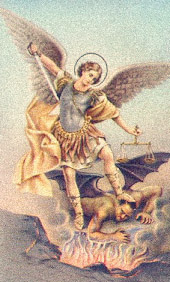 from the SAINT MICHAEL THE ARCHANGEL prayer (long form):
"…Behold, this primeval enemy and slayer of men has taken courage. Transformed into an angel of light, he wanders about with all the multitude of wicked spirits, invading the earth in order to blot out the name of God and of His Christ, to seize upon, slay and cast into eternal perdition souls destined for the crown of eternal glory. This wicked dragon pours out, as a most impure flood, the venom of his malice on men of depraved mind and corrupt heart, the spirit of lying, of impiety, of blasphemy, and the pestilent breath of impurity, and of every vice and iniquity. These most crafty enemies have filled and inebriated with gall and bitterness the Church, the spouse of the immaculate Lamb, and have laid impious hands on her most sacred possessions. In the Holy Place itself, where the See of Holy Peter and the Chair of Truth has been set up as the light of the world, they have raised the throne of their abominable impiety, with the iniquitous design that when the Pastor has been struck, the sheep may be…."

2 comments for “VIDEO: Toward The False Light”