The Antichrist is being invoked and called for now, today, by agents of Lucifer. Please pray.

A humanistic new age one world religion in a new world order. Earth worship. The United Nations.
Prophecies are being fulfilled and biblical truths are now quickly unfolding in this 'new dawn'.
Please notice this phrase in the video:
"We are approaching a time when we can expect another great individual to come to lead us forward on this path. Hence, the call in the Great Invocation 'May the coming one return to earth.'"

The Lucis Trust is a nonprofit organization founded in 1922 by Alice Bailey.  Alice Bailey was a disciple of occultist Helena Blavatsky, a prolific author, theosophist, and spiritual teacher who taught a form of universal spirituality.  She was one of the first authors to use the term "new age".  The Lucis Trust was originally incorporated to act as a fiduciary trust for esoteric publishing and activities concerned with the establishment of "right human relations". The publishing company was originally named the Lucifer Publishing Company and changed its name in 1925 to Lucis Publishing Company. The Lucis Trust has Consultative Status with the Economic and Social Council of the United Nations (ECOSOC)  and  World Goodwill is recognized by the Department of Public Information at the United Nations as a Non-Governmental Organisation (NGO). The Trust also exists in Great Britain as Lucis Trust Ltd., in Switzerland as Lucis Trust Association, and in the Netherlands as Lucis Trust Stichting. 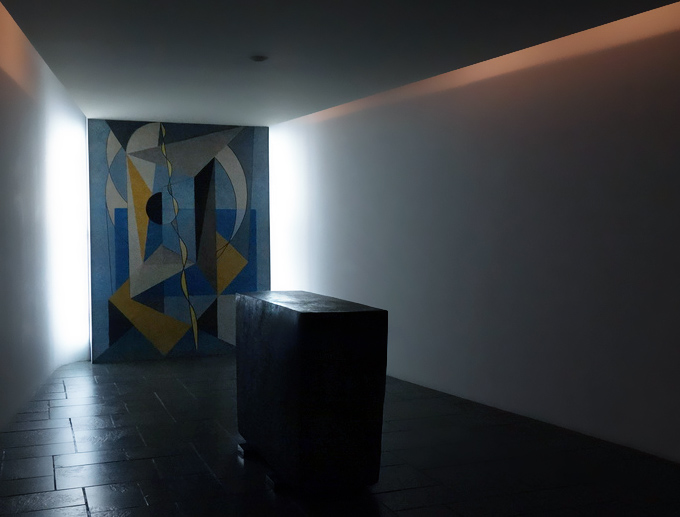 The 'Meditation Room' within The United Nations

The Lucis Trust also serves as a sort of "custodian" of and often makes use of the United Nations Meditation Room located at the UN Headquarters in New York City.  The UN Meditation Room (known as The Room of Quiet, the Room of Stillness, and the Prayer Room) was re-designed and transformed in 1957 by Dag Hammarskjöld, the second Secretary-General of the United Nations.  Hammarskjöld has been referred to as a "modern day Mystic". His instructions and specifications about the Room's design were extremely specific, even down to the type of weave used in the carpeting.  The Room is shaped as a pyramid laying on it's side.  It is 30 feet long, 18 feet wide at the entrance, and 9 feet wide at the other end.  The Room faces North-Northeast.  It has no windows.  At the center of the Meditation Room is a 4 foot high iron ore slab. The stone is the largest magnetite ever mined and was a gift from the King of Sweden. The black polished stone is extremely magnetic, weighs over six and half tons, and rests on a large concrete base that supports it and descends to bedrock below.   The dark rock is lit by a single beam of light from above.  Hammarskjöld himself described the magnetite as an altar, writing "We may see it as an altar, empty not because there is no God, not because it is an altar to an unknown god, but because it is dedicated to the God whom man worships under many names and in many forms".  The Room is very dimly lit and features padding in the walls to absorb all sound.  The Meditation Room includes a mural of geometric patterns mainly in shades of grays and blues, but with accents of yellow and white patterns and as a focal point, a black half-sphere. The fresco is 8 feet 8 inches high and 6 feet 8 inches wide and was painted by Swedish artist Bo Beskow, a personal friend of Dag Hammarskjöld.
The World Goodwill Bulletin (published by Lucis Trust) described the Meditation Room in 1957 in an article called "Lodestone", writing:
"The visitor will be totally unprepared for what he will see as he steps in the door for a moment of quiet. Because of the converging walls and the dim light, he will experience a peculiar spatial disorientation, and dimension and perspective will seem difficult to establish. In the center of the room, he will see, illuminated by a single point of light from the ceiling, a rectangular mass.  Those who are wedded to seeking communion in traditional settings may be somewhat ill at ease here. This is a sudden break with prior experience. One is thrown violently upon his own resources. The room and the concept do not seem indicative of the supplications or the dualistic concept of the mystic in which illumination is sought and is a boon granted by Deity. Rather, seemingly inherent in the decoration of the room, in the pinpoint of light playing on the ore, is the concept of a personal concentration of forces, creating a focus that illumines the field of attention. The pinpoint of light, the void of space, the illuminated crystalline ore – one feels projected into a setting of cosmological symbolism rather than one of planetary or even solar intent.  It is interesting to speculate on what the long-term influence of this 'new departure' will be on current religious thinking. Ensconced here in the highest Hall of Man, it cannot be inconsiderable. Whatever interpretations one may attribute to the United Nations Meditation Room, it can be said with certainty that the words and the repercussions have only just begun."

THE CATECHISM OF THE CATHOLIC CHURCH
"Before Christ's second coming the Church must pass through a final trial that will shake the faith of many believers. The persecution that accompanies her pilgrimage on earth will unveil the "mystery of iniquity" in the form of a religious deception offering men an apparent solution to their problems at the price of apostasy from the truth. The supreme religious deception is that of the Antichrist, a pseudo-messianism by which man glorifies himself in place of God and of his Messiah come in the flesh."

A PRAYER FOR OUR TIME
"O God the Father, in the name of Your precious Son, I call on you to prevent the antichrist from ensnaring the souls of your children.
I beg you, Almighty Father, to stop him from inflicting terror on Your children.
I beg you to stop him from contaminating Your Creation and ask You to have Mercy on those poor souls who will be powerless against him. Hear my prayer, dear Father, and save all your children from this terrible evil.
Amen."

← VIDEO: The History of the Occult – Decoded
VIDEO: The Divine Justice →

8 comments for “VIDEO: Antichrist – The Storm Is Coming”