Above, the French Diocese of Belfort Montbeliard (Bishop Claude Schockert) presents The Stations of The Cross as interpreted by Polish born artist Grazyna Tarkowska.

Jesus is clearly and unmistakably portrayed as a "grey" alien.

(You can see more from the "Stations of The Cross" endorsed by The Diocese of Belfort Montbeliard at the bottom of this page.)

If these visages of 'Jesus' were in a museum or a coffee shop it wouldn't be all that much to discuss, but this 'Jesus-Alien' is being displayed and used as a meditation on The Stations of the Cross under the banner of a Catholic Diocese.
Aliens are an incredibly important part of many branches of the New Age Movement, while many Christians and others believe that "aliens" such as those pictured here (particularly the 'greys') are not visitors from outer-space but actually demonic beings in disguise. It is also worth noting that beyond the intentional depiction of Christ as an alien life form, the artist has also chosen to include a pyramid with the 'all-seeing-eye' above 'Jesus' – a symbol now most readily associated with the 'illuminati'.

These words of Jesus given to Maria Divine Mercy come to mind:

" They will falsely claim that man can sustain life on other planets, apart from Earth. Earth is the only living part of the universe created by God for His children."
Jesus Message to Maria Divine Mercy, March 29, 2014

"Those hardened people, whose first allegiance is to Satan and the evil sects he controls in the world, will not want to be saved. Instead, they will choose a different paradise. A paradise they are led to believe exists, outside of the one promised to mankind by My Father. This false paradise, which satanic followers of the beast believe in, does not exist. It has been created, by Satan, in the minds of his disciples, and is simply an illusion. So much is promised. Dark souls believe in a different universe, a different entity, where God does not Exist. They believe in other life forms, other creatures and a peaceful regime, all of which is based on a lie. None of this is real children. It does not, nor cannot exist, because, it was not created by My Father. God the Almighty Father, created the entire universe – the stars, the planets and the Earth as well as all the spaces in between. Pray for those who follow such cults."
Jesus Message to Maria Divine Mercy, January 24, 2012, The Book of Truth

It's Just a Painting – Aesthetic Terrorism 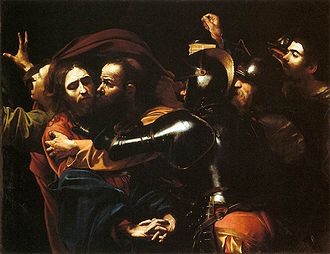 Some may argue this is"just modern art"; "it's subjective"; it shouldn't be "taken so seriously". We have a strong contrary view.
Art is and always has been a powerful driving force of human spiritual experience and nowhere has it played a greater role than that of the Catholic Church. Think of Michelangelo's The Sistine Chapel, DaVinci's Last Supper, Caravaggio's The Taking of Christ – the list is endless.  What happened?
Did you know that there is an art movement called "Aesthetic Terrorism"?
According to Carl Raschke, Professor of Religious Studies:  Aesthetic Terrorism sees art as an agent of cultural deconstruction with a mission to displace traditional values and the enshrinement of a new moral code; a revolt against classical culture on behalf of moral anarchism.  It only requires a quick research of this art world phenomena to learn that the under belly of it's design is Luciferianism. Notable and very obvious Aesthetic Terrorists include Robert Mapplethorpe (who submerged a crucifix in urine as 'art'), Charles Baudelaire, Kenneth Anger, and Marilyn Manson. However, the fundamental ideas and spirit of the Aesthetic Terrorism movement are now quite ingrained into the mainstream and have finally eclipsed most everything else of what we presently call art. For instance, you will notice a prevailing sense of darkness, apathy, irreverence, or anger in most of what is produced by all forms of media now. Our minds and spirit now readily accept what would have been shocking without even a thought or a second look. If you asked people on the street what the "purpose" of art is, a vast majority might say something like "to provoke", "to make a point", "to be controversial", "to challenge our ideas", or "to let the artist express him/herself" instead of "to inspire", "to move", "to humble", "to uplift", "to be beautiful", or "to cause a sense of awe".
The Aesthetic Terrorists have, for the most part, won this battle and the ramifications of this on a spiritual level cannot be over stressed.

Credits: We were made aware of this artwork by the watchful eye of a diligent soul on facebook and through a post on www.traditioninaction.org -THANK YOU!

PLEASE SEE RELATED PAGES:
Children of The Father – a comparison of what we love as children versus 'adults' – To be Children of God
Christ's Words to Celebrities – See in pictures some effects of Aesthetic Terrorism
The New Age of The New World Order – Where it all comes from and is trying to go – Luciferianism, Symbols, New Age, Occult