Before we begin this study of some facets of the Pope Francis I papacy, it is our desire to clarify that the intent of this article is not to attack, insult or slander Jorge Mario Bergoglio, The Catholic Church, and/or those individuals who are currently working for Pope Francis. This page is not serving the purpose of spreading acrimony toward this 'pope' or any of the people discussed here below, but instead aspires only to impart awareness through the use of available information for everyone's good (according to our discernment and objective examination).
This page is further accompanied by Scriptural references and revelations given to Maria Divine Mercy in The Book of Truth which we find to be accurate insofar as we believe.

Here below are the screenshots of the photos' thumbnails within the gallery of a new Facebook group dedicated to "defending" Pope Francis. It doesn't take much commentary to notice that the object of worship is not Our Lord Jesus Christ but the man Pope Francis. The maker(s) of the page also made a comment accusing those who believe in God's Messages through the Book of Truth of being "satanists". While such accusation is of no surprise, we thought that the huge amount of images in honor of this pope – and created by the group behind this account – was shocking. In just 15 months they have come to producing an enormous photographic campaign in his favor. It is not to be dismissed that the designers of these portrayals could easily be the same ones who create slandering vignettes of Maria Divine Mercy. We wonder about the reason behind the creation of all these pages and blogs; usually, people, sports' teams, corporations, organizations, groups, or nations are only on the attack (or aggressively push their agenda) when feeling threatened by another party. Therefore, is this angry attack from the Vatican made out of fear? Is the Truth of God's messages truly becoming a cross for Pope Francis? While we do not know for sure, we do remember the words that Jesus said to Maria Divine Mercy:

As seen below, the center is once again Pope Francis rather than Jesus Christ. If and when the image of the Lord is being used, it is only in the background to always serve False Prophet Pope Francis' primary role in the Church and in the world.  Let's also not forget that the constant production of images, books, holy photos, rosaries, statutes, posters, articles, clips, cups, paintings and other merchandise is typical of marketing strategies and product placements in the world of advertisement and in order to sell a good. The same is done by lobbies and corporations during a political campaign: they tirelessly push the person they are paid to support and promote while constantly attacking any one or thing they view in opposition to their cause. 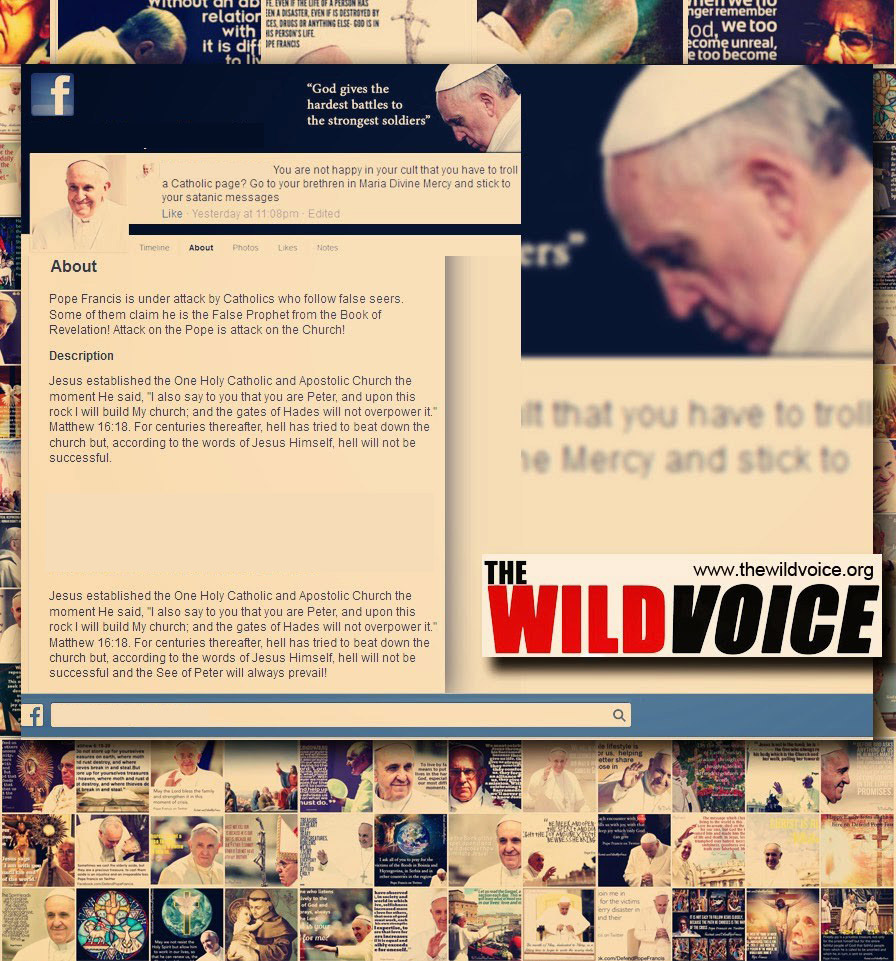 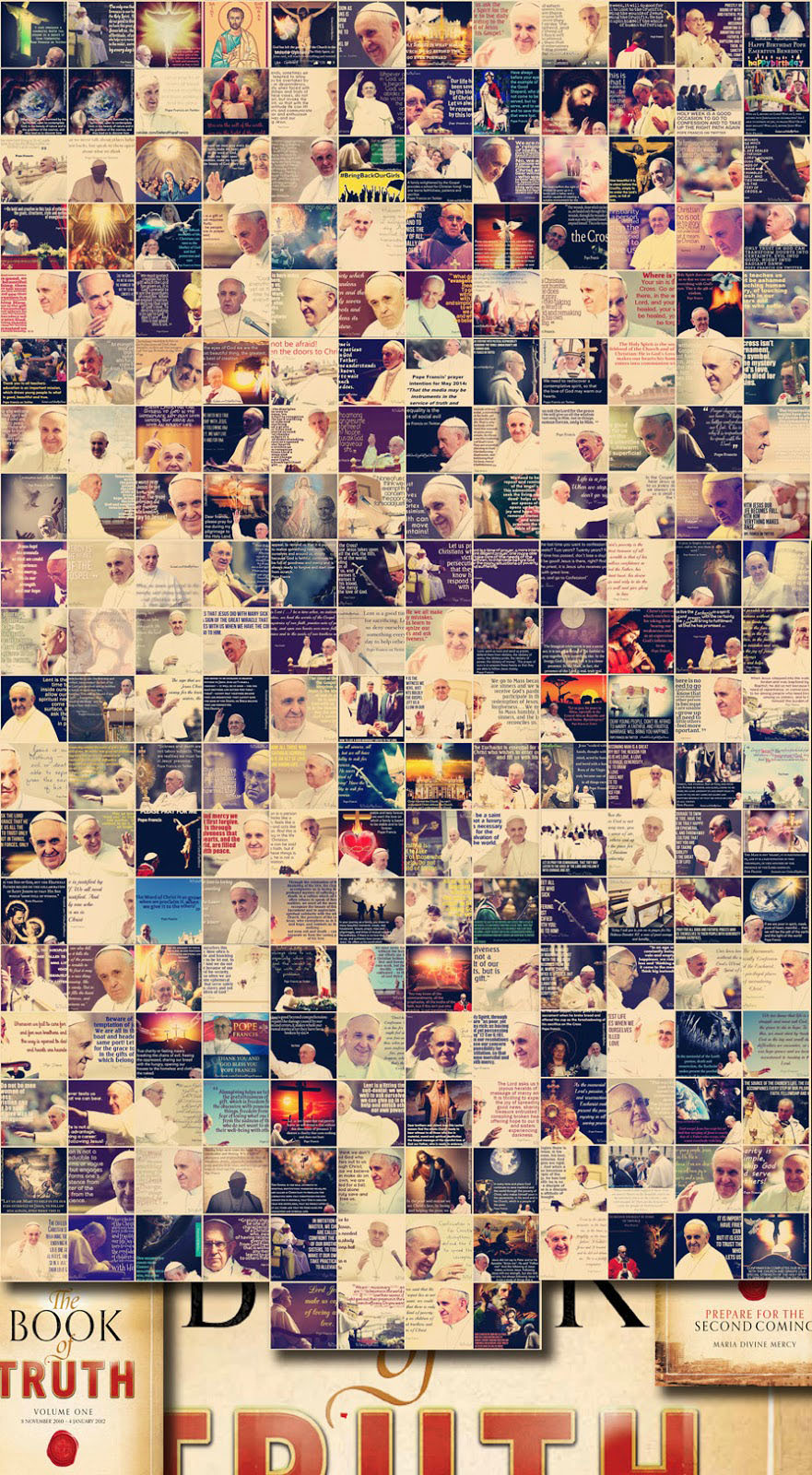 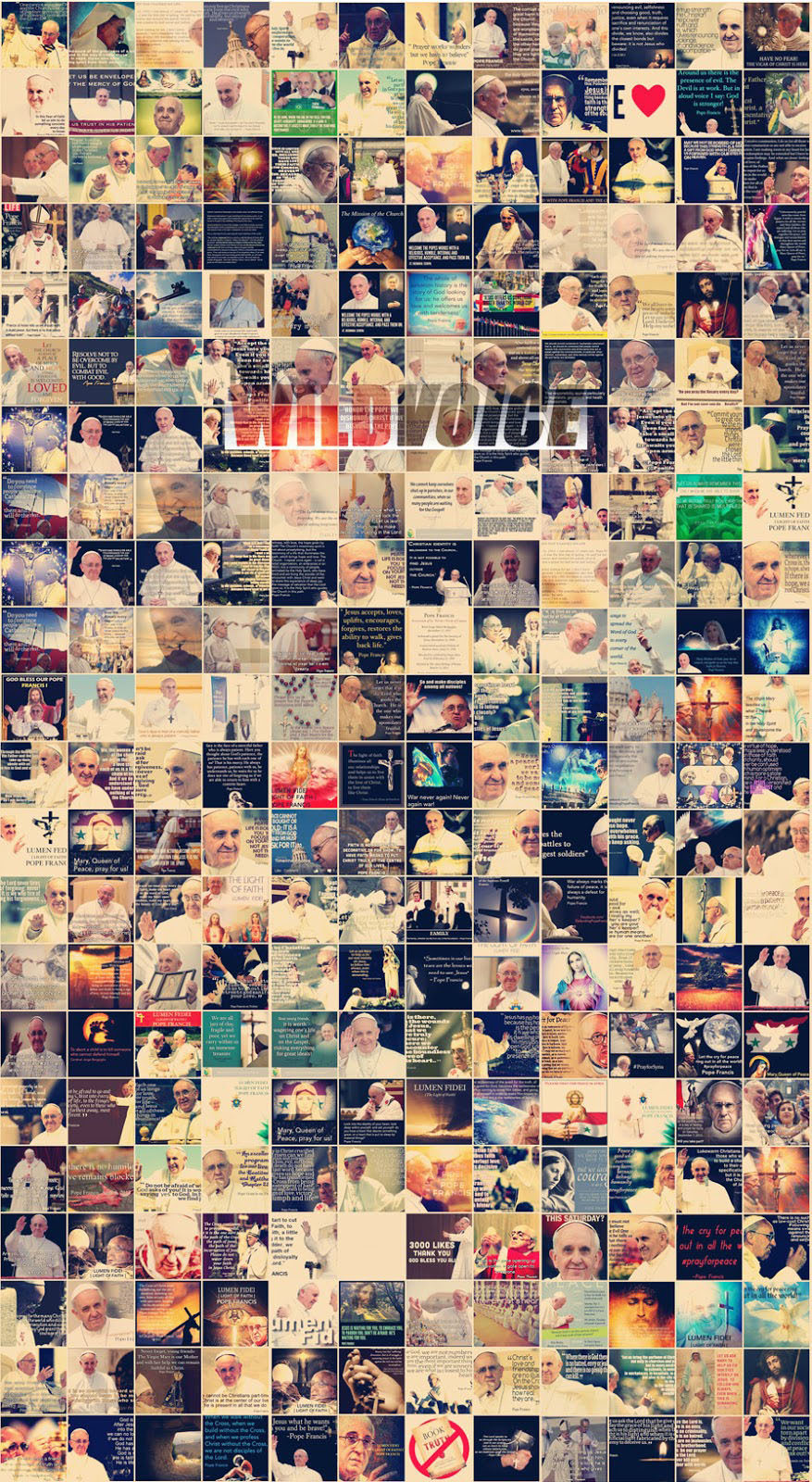 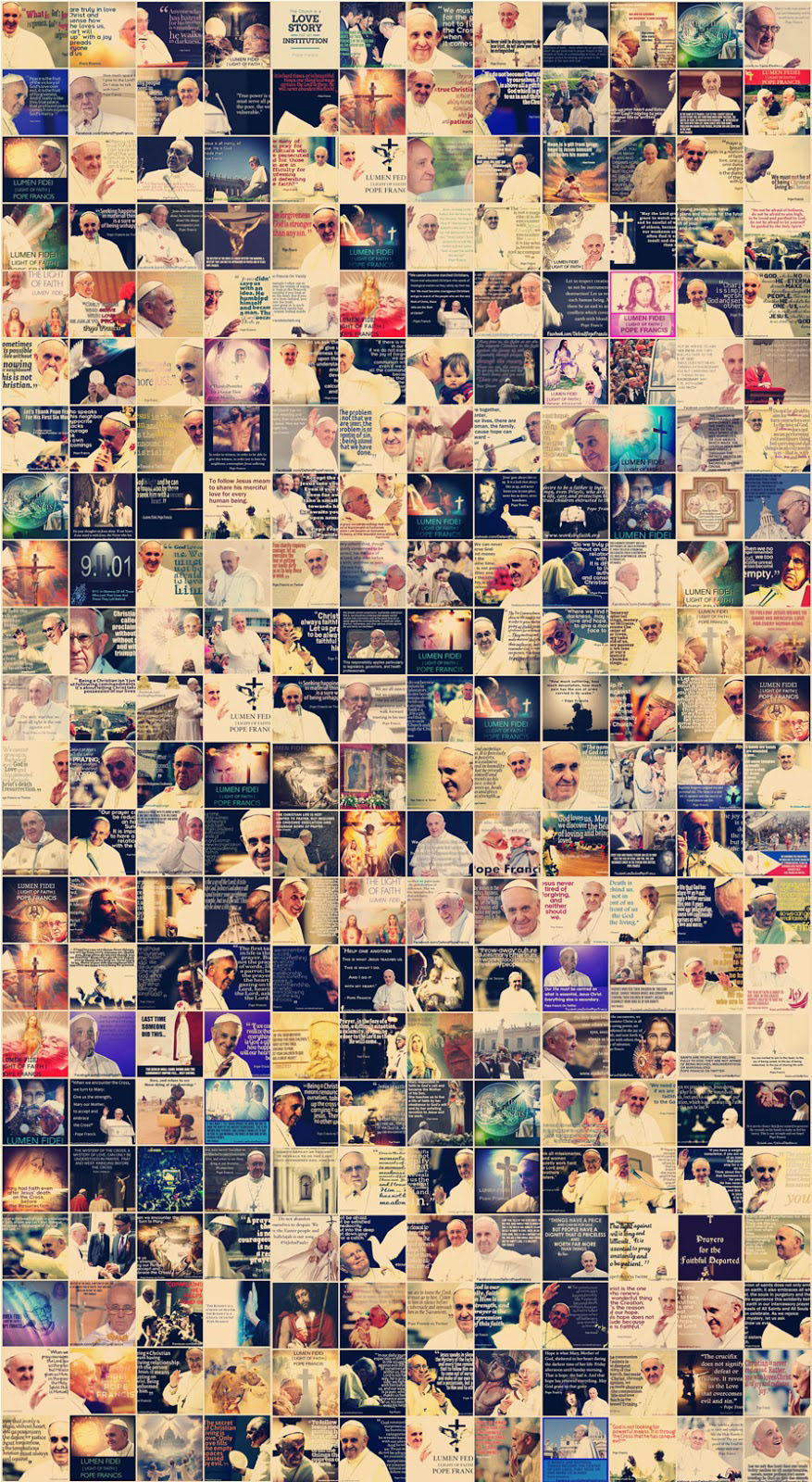 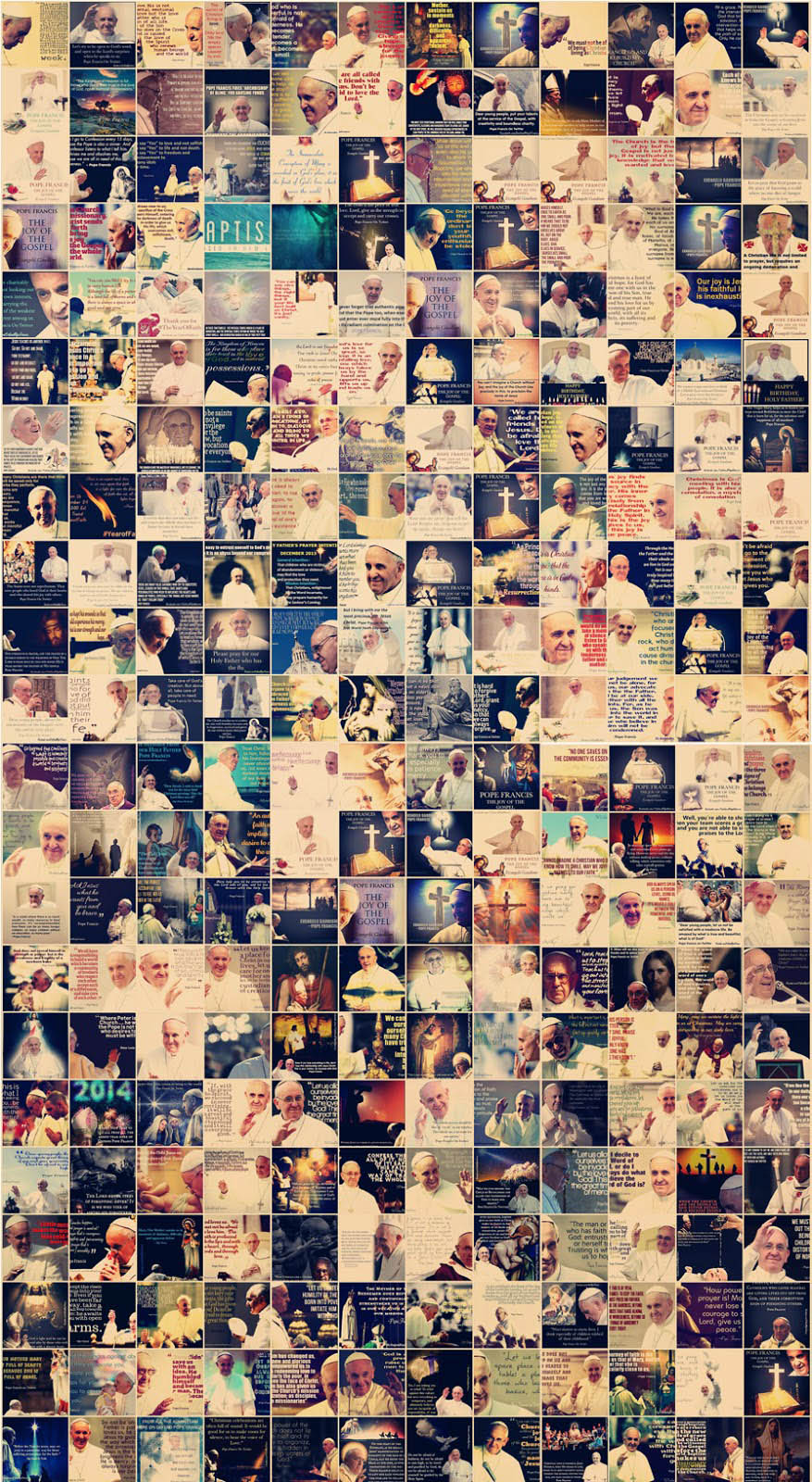 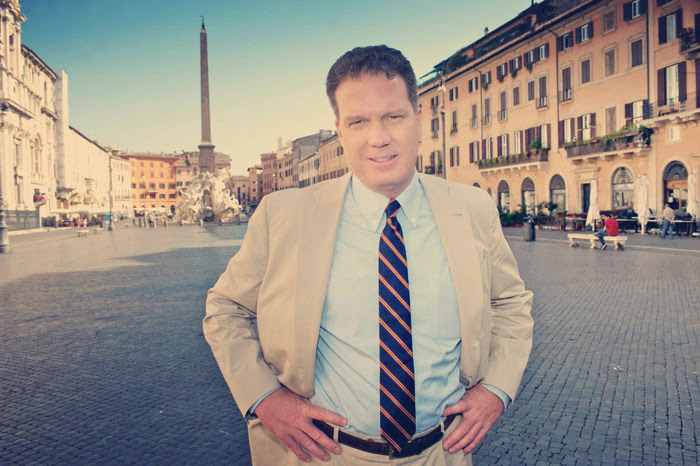 Greg Burke, a fifty-three year old senior media advisor to the Vatican, worked for Fox News for about 10 years. Born in St. Louis (Missouri) and member of the controversial Opus Dei, he was hired by the Vatican in June 2012 as Pope Benedict XVI was about to be ousted by the ecclesiastic masons within the system. Pope Francis joined Twitter a few months after Burke took up the new role. Trying on a firefighter's helmet, allowing a young boy to hug his leg during a mass, and phoning up his followers for a chat are just a few of the ways Pope Francis has attracted headlines in the last few months. And after years of negative press, the Catholic Church is basking in the 'Francis Effect' which has been credited with a 20 percent rise in congregations in the UK and an explosive interest in the heroic acts of this vicar all over the world. But who is the PR guru working quietly behind the scenes to help push Pope Francis forward and leading the Church out of one of its darkest spells following a slew of recent scandals?
This mastermind's name is Greg Burke, the senior media advisor to the Vatican. A keen golfer, he's the author of several books – one of which is about the Italian soccer team 'Parma' ('Parma: A Year In'). Before a ten year work relationship with Fox, Mr. Burke was Time Magazine's Rome correspondent for a decade. He additionally worked as a stringer for news agency Reuters in Rome. In his previous jobs, he covered the illness and death of Pope John Paul II, the election of Pope Benedict XVI, the pedophile scandal, the VatiLeaks saga, and the crackdown on American nuns, reported The Daily Beast. 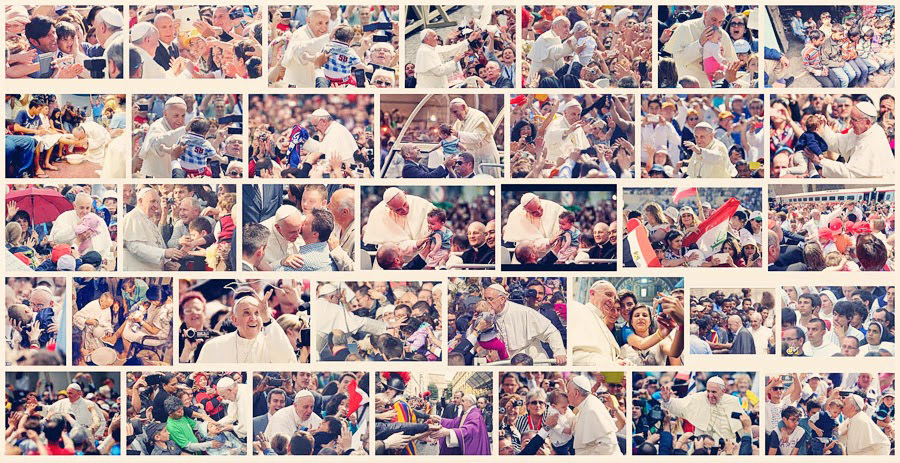 Mr Burke will regularly tweet and is credited with having encouraged the Pope to join Twitter (which Francis soon did).  'A scandal is a scandal, and I’ve reported on them all,' he says. 'It all had to be told, as much as things are true, it’s good they’ve come out.'
He grew up in a Catholic family to then become a member of the controversial Catholic group Opus Dei at the age of 18 as a 'numerary' in the movement – a celibate layman. His papal politics may have developed since his earlier days when shortly before Pope Benedict was selected he reasoned that he was not in the running, reported Vice. 'He’s considered too conservative' Mr Burke explained, noting that Ratzinger was called 'the 'Panzer Cardinal' because he took so many hits for Pope John Paul II.
Burke's role – a revolution in the Vatican's communications structure – is similar to that of communications advisers in the White House. He reports directly to the Vatican's deputy secretary of state, Archbishop Angelo Becciu, the third-ranking person in the Vatican hierarchy. 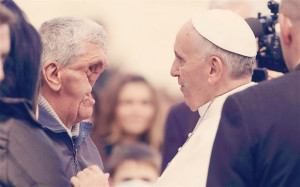 Pope Francis I took the time, after his weekly Papal audience in St. Peter's Square, to bless a severely disfigured man. The Pope has attracted headlines for each action, statement and appearance. These convenient (if not contrived) photo ops are just one of many ways Pope Francis has conquered the world's major magazine covers, newspapers' headlines, and the Internet's most important press websites and blogs. 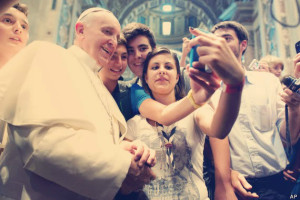 Seen it all before: The teenage pilgrims show Pope Francis their technology – but it appears he is well in tune with modern life. Although he can now be credited with helping to build Pope Francis' popular image, it seems Mr Burke was not initially keen when he was first called about the position when he was dining out for his father's 90th birthday. 'I told them no twice but the more I thought about it the more it seemed like the right thing to do. I can't imagine a more exciting challenge for me at this time' Mr Burke told Reuters.
He accepted the role at a troubling time for the Catholic Church – the Vatican had been bedeviled by communications blunders ever since Pope Benedict XVI's 2005 election, and was dealing with a scandal over Vatican documents that were leaked to Italian journalists. 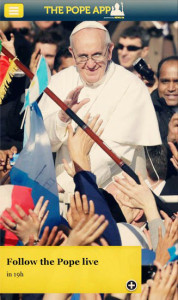 Mr Burke is the only person in the Vatican's communications structure with vast print and television experience from outside the sometimes insular world of Catholic media.
'I've had a lot of diverse media experience that I hope I can put to use for the Church that I love' Mr Burke said at the time.
When Mr Burke was appointed, Fr John Wauck -a professor at the Pontifical University of the Holy Cross in Rome – told the Catholic Herald: 'He’s a lay person, from the professional world, who understands how theologians think and shares their faith… he’s well respected and genuinely liked by the journalists in Rome. He’s an English-language media professional who knows Italy (the language, the culture, the mindset) and the Vatican inside out. This is important because many of the Vatican’s difficulties with the media stem from things getting lost in translation. Greg can help prevent that.' Mr Burke has also guided the Vatican through the modern digital age. He told an auditorium full of reporters this year: 'I actually thought I’d leave Fox to go work for a football club' but ended up in the Vatican. No free tickets to football matches – but really good seats at Christmas and Easter.' Greg Burke is constantly on Twitter posting thousands upon thousands of tweets. One of them included a photo of pop star Jennifer Lopez in Italy alongside the caption: 'Was @JLo on a shopping spree for rosaries in Rome?' 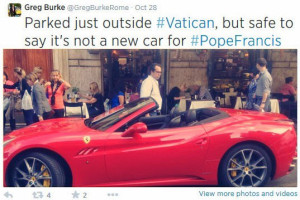 Another post shows a photo of a convertible red Ferarri alongside the caption: 'Parked just outside #Vatican, but safe to say it's not a new car for #PopeFrancis'. It is easy to note that Greg Burke's marketing knowledge and brilliant intuitions have been the fundamental pillar of Pope Francis' global marketing triumph. The mixture of Jorge Bergolgio's doctrinally tampered approach and Burke's unceasing production of publicity wonders have proven unprecedentedly miraculous for the artificial creation of this pope's glorious status.
Mr Burke has also guided the Vatican through the modern digital age: the pope started tweeting a few months after he joined. At the time, Mr Burke said the Twitter handle @Pontifex is appropriate for a number of reasons.'The handle is a good one. It means "pope" and it also means "bridge builder",' he said. 'The Pope wants to reach out to everyone'. The Vatican, stung by communications blunders and mired in a leaks scandal, hired the American journalist in June 2012 from Fox News to help improve its relations with the media: 'We are going to get a spiritual message. The Pope is not going to be walking around with a Blackberry or an iPad and no one is going to be putting words into the Pope's mouth. He will tweet what he wants to tweet,' Mr Burke said. Last year Mr Burke said he didn't know what, if any, role his membership in Opus Dei played in getting his role.
Opus is greatly in favor in the Vatican these days, particularly as other new religious movements such as the Legion of Christ have lost credibility with their own problems.
'I'm an old-fashioned Midwestern Catholic whose mother went to Mass every day,' Burke said last year. 'Am I being hired because I'm in Opus Dei?' he asked. 'It might come into play.' Founded in 1928, Opus Dei is part of the Catholic Church and has 500 members across Britain. The stated mission of the organization – which means 'God's Work' – is to spread the Christian message and help people embrace Catholicism in their everyday work. Many experts (and for a long time) have defined the organization to be a questionable (and brainwashing) cult of secret origin and agenda. 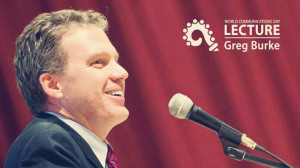 In this segment you will hear about the building of Mario Bergoglio's image as a media sensation as well as Mr Burke's need to underline that the pope's (now obvious) false humility is, in actuality, 'real'. It takes less than thirty-six minutes to know that Francis' publicity guru is not revealing any truth behind the game.