In an age when we are constantly and strongly encouraged to only get excited by the 'new' and the 'now', The WILDVOICE  invites you to some reflection. Curated below is just a small sampling of headlines and mainstream news items reported over just the past week. Most likely, you've seen these stories already. However, it is often when we look back that we may begin to see patterns, connections, and the much bigger developing picture going forward. 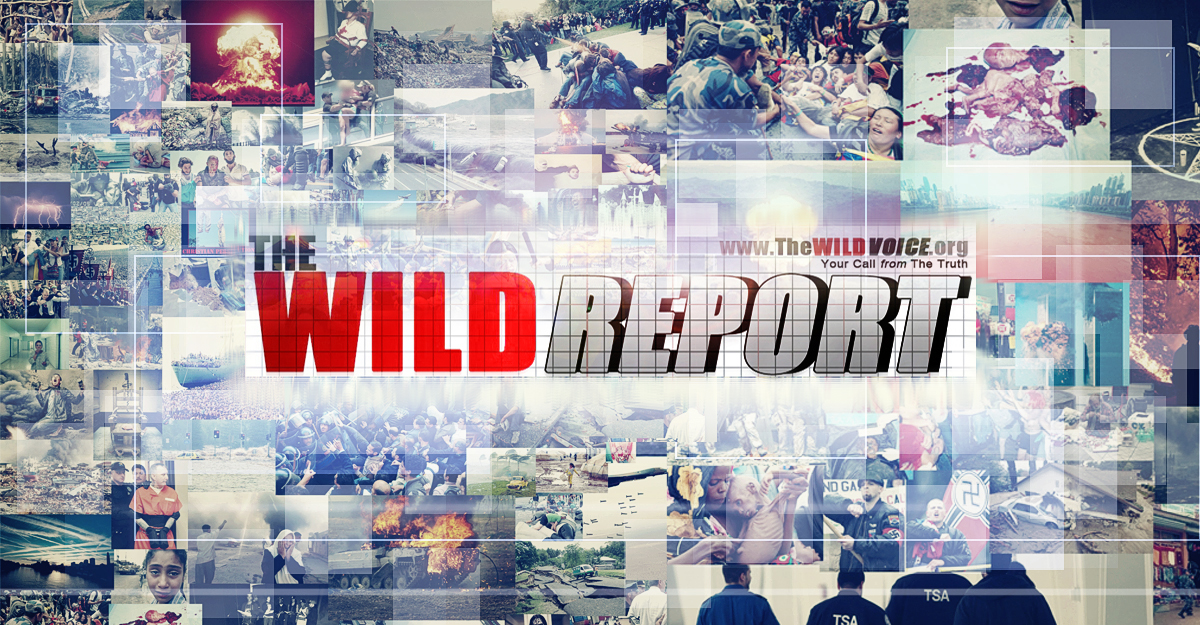 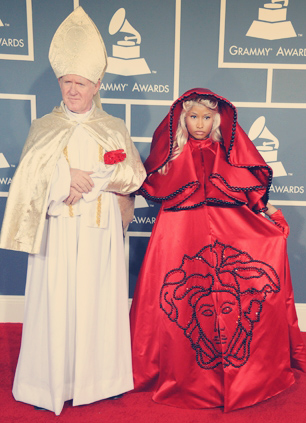 Nicki Minaj and the Pope at the Grammy Awards is 2012

We have witnessed another strange week, here on Planet Earth. What is happening? We know that the impatiently awaited Synod of the Catholic Church is taking place while Nicki Minaj is telling us "Oh my gosh, look at her butt" in her new song "Anaconda". Is this anaconda entering the sacred Temple of God in Rome? We might be crossing the line of prophetic delusion and super-hyper-fanatical-ultra-conservative-traditional fundamentalism (as Pope Bergoglio might say), but the rainbow movement is entering the Basilica: numerous gay lobbies from all over the world have organized countless meetings and events in the hope of a VATICAN III, as Geoffrey Robinson – a former bishop of the Archdiocese of Sydney and member of a group of ultra-liberal bishops – said.
Symbolically not too far from the "LBGT (QROMPAEKIDV…) Catholic Revolution", a sculpture of a crucified Christ is being hidden by a white curtain on the altar of the Holy Family Catholic Church in Inverness (IL) for a Rosh Hashana service.
If this news did not "shake it off" for you, as Taylor Swift's last song reminds us to do about three dozens times, Oklahoma Catholic Archbishop Paul S. Coakley performed prayers from an exorcism rite in reparation of the Satanic Mass recently held in the state capital. And if Satan is being defeated in "The Big Friendly", he manages to make himself known in a few other places: in Maroon 5's new music video "Animal" (could the title be any more appropriate?) and on HBO's new series "True Detective", another peace-giving entertainment device based on the true story of Satanist and child molester Louis Lamonica Jr., a pastor from Louisiana.
Is there any good news? It depends on what one might perceive to be "good". The New World Order is advancing; Ebola is being considered by ISIS as a possible weapon to wipe out the infidels (those few billions who just happened to not be Muslims); you want more good news? October is "Zombie Apocalypse Month" for Kansas, and Aaron and Melissa Klein have lost their bakery for having freely chosen not to prepare a wedding cake for a lesbian couple. This is what the LGBT (XHDPN…) community is now doing: make great money if any person exercises his/her freedom of opinion, speech, or religion. Sounds like ISIS? Could that "censored" Jesus on the altar of a Catholic Revolution Church have something to do with this mess? And after the synod, will this mess enter the Holy Mass?
Since the successor of Saint Peter, Pope Bergoglio, wanted to baptize the aliens, what would you say to a Martian if he asked you "Is your world a good place?". We will leave it at this. Let the white curtain close the show.

ALL EYES ON CHANGING CATHOLIC FAMILY AS POPE FRANCIS SYNOD BEGINS
Huffington Post 10/4
Convened by Pope Francis, the group will spend two weeks exploring not just Catholic views on same-sex marriage, but how Catholics around the world do sex, marriage and family…

CATHOLIC THEOLOGIAN KELLY BOWRING ASKS POPE FRANCIS 'ARE YOU PLANNING TO REDEFINE CHURCH DOCTRINE?'
Christian News Wire 10/1
Bowring goes on to ask some hard-hitting questions of the Pope, including: "Why are you vigorously supporting dissenting bishops who are proposing heretical pastoral concessions and in effect seeking to tamper with sacred doctrine, while you are ruthlessly dismissing, demoting or disempowering other Bishops who are known to be faithful to doctrine?"

UNDER POPE FRANCIS CHURCH LEADERS DISCUSS IF CHURCH SHOULD CHANGE
The New York Times 10/3
Pope Francis has encouraged a robust and open debate over the contentious social issues that have long sundered the Roman Catholic Church. Now, with a critical meeting on the theme of family about to begin at the Vatican, he is seemingly getting what he wanted…

GAY CATHOLICS CONVERGE ON ROME FOR FAMILY SYNOD
Lifesite News 10/3
As pro-family and pro-life advocates gather in Rome this week to have their voices heard during the Extraordinary Synod of Bishops on the family, so too are the world’s homosexualist leaders…

IS POPE FRANCIS PURGING CONSERVATIVES?
The Catholic Herald 10/3
The rolling of heads is hardly a de-Ratzingerisation, but it does suggest an adjustment to the line taken by Benedict XVI and St John Paul II…

POPE FRANCIS TO REMOVE CONSERVATIVE CARDINAL – NOW CONFIRMED
Breitbart 09/29
A close associate of Cardinal Raymond Burke has told Breitbart News that the rumors of his departure are true, and the announcement is expected soon…

US EBOLA PATIENT TURNS CRITICAL
Reuters 10/5
The first Ebola patient diagnosed in the United States took a turn for the worse on Saturday, slipping from serious to critical condition in a Dallas hospital…

ISIS MAY USE EBOLA AS BIO WEAPON
Forbes 10/5
ISIS may already be thinking of using Ebola as a low-tech weapon of bio-terror, says a national security expert, who notes that the “Islamic State of Iraq and Syria” and terror groups like it wouldn’t even have to weaponize the virus to attempt to wreak strategic global infection…

CANADIAN POLICE ON HIGH ALERT AFTER ISIS URGES MEMBERS TO ATTACK CANADA
Ottawa Citizen 9/26
A spokesman for Islamic State, the militant group controlling parts of Iraq and Syria, called on Muslims to kill anyone whose country was taking part in a U.S.-led coalition to fight the group, including Canadians…

CATHOLIC ARCHBISHOP PERFORMS PRAYERS OF EXORCISM AFTER BLACK MASS IN OKLAHOMA CITY
News OK 10/2
Roman Catholic Archbishop Paul S. Coakley and a priest performed “prayers of exorcism” to rid the Civic Center Music Hall of evil spirits that may have lingered after a satanic “black mass” was held there…

MAROON 5's NEW MUSIC VIDEO ACCUSED OF SATANISM – SEXUAL ASSAULT SUPPORT GROUPS PROTEST
Breathe Cast 10/2
Lead singer of Maroon 5, Adam Levine has been criticized online in the past for dabbing in Satanism with his art. Maroon 5's new '"Animal" video is receiving a lot of heat from many sexual assault support groups throughout the country for the themes featured, but could it be that its offensive themes are drenched in Satanism?…

BAKERS FACE BANKRUPTCY NOW FOR REFUSING TO BAKE WEDDING CAKE FOR LESBIAN COUPLE
The Daily Signal 9/29
Earlier this year, the Oregon Bureau of Labor and Industries found “substantial evidence” that Aaron and Melissa Klein, owners of Sweet Cakes by Melissa, discriminated against the lesbian couple. They now face a fine in excess of $150,000.

ABC FAMILY LEADS THE WAY IN LGBT INCLUSIVENESS
Quartz 10/2
Out of 147.5 hours of original programming on ABC Family in the 2013-2014 season, 62.5 hours—42%—featured LGBT characters or story lines. The teen-targeted network has been including LGBT characters in its original narratives for at least eight years...

THE REAL LGBT HEALTH EPIDEMIC – SUBSTANCE ABUSE
Chicago Phoenix 10/5
The Center for Disease Control is a treasure trove of bad news on LGBT health. According to its research, gay men and women are twice as likely to binge drink than their straight counterparts. An estimated 20 – 30 percent of us abuse intoxicating substances, compared to only 9 percent of the total population…

WHAT WILL PUTIN'S ROLE IN THE NEW WORLD ORDER BE?
Politico Magazine 9/2014
Putin is discovering his limits, and determining Europe’s new de facto laws, by surprise, and by force—first in Georgia in 2008, and now, even more starkly, in Ukraine…

WHERE DOES INDIA FIT IN THE NEW WORLD ORDER?
Bloomberg 9/29
Richard Haass, president at Council on Foreign Relations, and Ezekiel Emanuel, ethics and health policy department chair at UPenn, examine the role of India in the modern world as Prime Minister Narendra Modi attempts to expand business and update the infrastructure in the nation…

ON THE RADIO
(source BILLBOARD TOP 100) 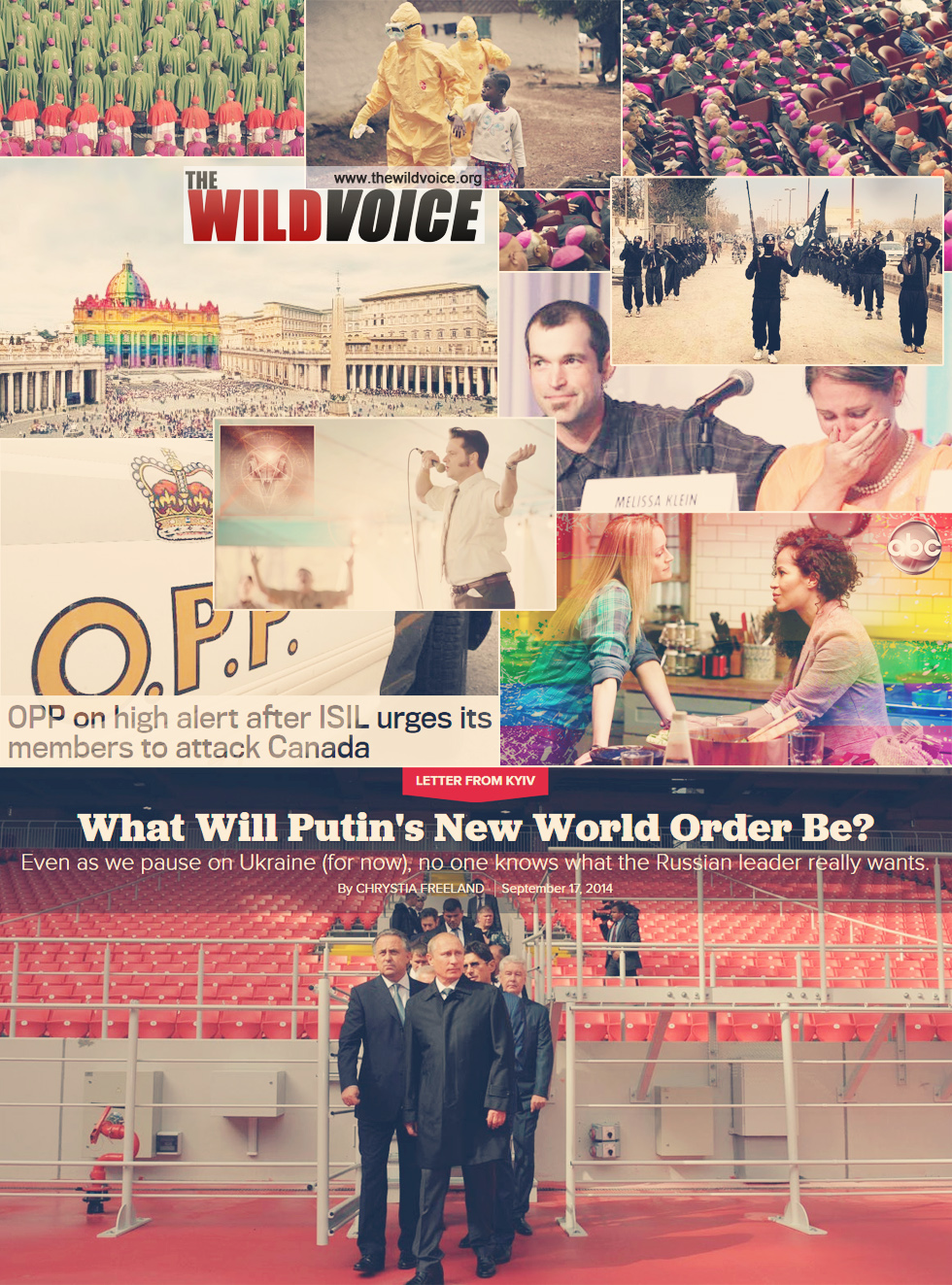